Today is the 2nd anniversary of the day my poor sweet beast died, or rather, that we put her out of her misery. That’s a lot more complicated to say than, simply, it’s her jahrzeit. 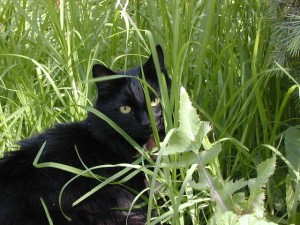 Kina in the Garden

When I was walking home this evening, who should run out and greet me but the elusive Buddy (aka Snowball aka Princess). I have seen him maybe once or twice in the last six months (there’s been construction nearby, and I figure he’s just been hiding and keeping a low profile).

He got his petting and I got my temporary pet.

I regularly end up in the situation where I have to fix a crap PHP application.

The latest one has lots and lots of PHP 3.x-era code, that references hashes without quoting the index, e.g.,

Now, the PHP interpreter understands this in actuality. It figures out that since the constant is not defined, the programmer probably meant that the index should be ‘baz’. It does, however, throw a well-deserved warning.

The code I’m trying to fix throws lots and lots of warnings. Rather than wade through all the warnings to find which ones are important, I started with the following:

The thousands of lines of output convinced me bigger guns were needed.

So we got ugly.

Note that that’s one line, and that WordPress seems to want to change some single quotes into back-ticks. Don’t be fooled!

All those extra backslashes and single quotes are to allow passing single-quotes within the regex, and not have bash consider them problematic.

Also note that this could be catastrophic if you have regular expressions in the code you’re operating on — do a diff with the backup version, and merge back the regexes.

I’m sure there are far more elegant solutions… primary among them, not using crap PHP apps in the first place!