So I got a few questions about that Javascript experiment, so I thought I’d add some explanation. In the process, I added some features to it.

So what’re all those variables, I was asked. And what do they mean?

To start with, this whole experiment was based on a traditional Islamic tiling pattern. I don’t know the actual origin, but I’m sure it goes way back.

So, step 1, you tile a plane with equilateral triangles. The number of triangles that fit across our page is what I called “Spacing.”

Next, you draw a circle at each intersection of lines. The size of the circle is “Radius” — in this model, a radius of 100% means that the neighboring circles touch. 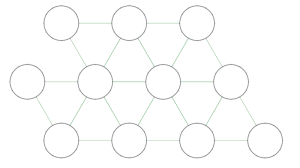 Last, you divide each circle into twelve equal pieces. Then, according to some predetermined pattern, you connect the points on neighboring circles. Here’s a traditional pattern: 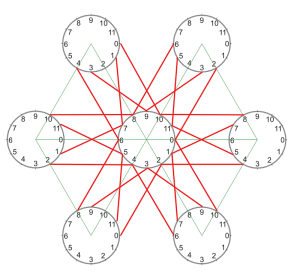 The only other variables of interest are “Column Radius Growth” and “Row Radius Growth” which is the percentage by which the radius of each circle changes depending on the number of the column or row (starting in the upper left-hand corner).

This time around, I’ve added a few different connection patterns.

Sorting lots of files into directories, by date

A process handles periodic tasks, and each time it does, it spits out some telemetry. The telemetry gets written off into a file each time. This process could be any of a number of interesting things: a procmail script doing something with incoming email, a Twitter-bot responding to searches, an IRC-bot responding to events, or whatever. The only important thing in this case is that it creates a variable number of log files each day, and the log files all get dumped into a single directory.

Before long, the log directory will be filled with thousands of files, and will be unmanageable. But, for some reason, we want to keep all these logs, and maybe actually use them. So the key is a script to move the logs into sub-directories based on date.

It turns out it’s easy to write a bash script to create directories in a YYYY-MM format, and move the files into them appropriately. The key is in the stat command. Conveniently, the implementation of this command is completely different and incompatible between Mac OS/BSD and Linux. Jesus H. Christ.


In Linux, the stat command will give you the data in an ISO format, and using the cut command, you can extract YYYY-MM information. The -p flag to mkdir makes it silently exit without complaining if a directory by that name already exists.

MacOS (or presumably other BSDs):

In this case, we’re telling stat that we want the modified date as a string, and we specify the time format.

Either of these would be easy to modify to single day resolution (changing which columns you cut in the Linux version, or the timestamp format in the Mac version).

Trying to find inspiration on a current geometric art project, I went to look at some old work I’d done. Well, or I tried to.

See, back in the 1990s, I spent lots and lots of time doing geometric art using my favorite vector graphics package. You know, MacDraw II. And then, oh happy day, I upgraded to MacDraw Pro, and later yet to Claris Draw. I don’t recall whether the file format changed between MacDraw II and MacDraw Pro, but there were definitely changes when it became Claris Draw.

Claris Draw continued to run on Mac OS until Apple abandoned PowerPC code support back in 10.5.

Now, five years ago, I started looking for a way to use those old files, and discovered Intaglio, which would read the files — mostly. Some of the really large files didn’t work so well. Even though I purchased a license, there was an upgrade to Intaglio that would have required I re-buy it to fix some bugs. It didn’t seem like there were new versions being released, and support was half-hearted at best1. So I gave up.

A year ago, I tried a number of other programs. I need to convert an old architectural diagram, and found that EazyDraw’s Retro version would read the formats. What’s more, they had a neat “rent-for-nine-month” license for just $20. I bought that, converted a few files, planned to convert all my old backlog, and promptly got distracted and let the nine-month license expire before doing anything.

So tonight, I bought another nine-month license, and went through and converted a few hundred files.

The opening of the old files is not perfect. One class of problem is fonts that I no longer have. Some of the problems seem to be positioning of elements (particularly on the oldest MacDraw files), which sometimes all pile up in one corner — but the elements are all there and could be rearranged to restore the original if I wanted to put the work into it. In some cases, it appears that complex elements (like groups) have acquired a background color. That too is easily remedied.

But what to convert to?

My vector graphics program of choice these days is Affinity Designer, and of course I can’t convert directly to their format. SVG worked well, until I discovered that ClarisDraw layers got ignored and left out of the converted file. Also, if you enable SVG Tidy, enough resolution gets removed from points that lines can shift around.

In the end, PDF results in the cleanest transfer. It preserves all the geometry and groupings.

But things do get lost. This is a probably a function of the lack of universal standard for vector images. One program may support the collecting of geometrical objects into layers. Another may not. In my conversion process, I’m losing the original layers. The geometry, however, is still preserved in a way that would let me move things around to different layers in Affinity Designer, so I’m OK with that.

But this is related to a larger problem. Future-proofing is hard. I say this as a fool with boxes of 5.25″ floppies in a DSDD 40-track hard-sector format readable by only a handful of TRS-80s from thirty plus years ago. But even if the media was still good, and even if I could find hardware to read it, what then? What would I do with text files created in Electric Pencil? I have to face the fact that the games I wrote in Z-80 assembler are gone, buried in the sands of time. I mean, maybe I could find a way to read the disks (if they’re not completely faded away), and maybe I could find a TRS-80 simulator that supports some of the hacks I did, and maybe it would all work. But the amount of time required would be substantial. And for what? Revisit some nostalgia of my misspent youth?

But some of my old stuff I’d like to keep around. You could argue that I should have been paying attention and migrating data as I go. Guilty as charged. But it’s hard. And stuff inevitably falls through the cracks. For example, I use Apple’s Aperture for organizing and editing my photography (digital workflow, digital asset management, DAM … whatever you want to call it). Originally, I used a clumsy system of directories. Then I graduated to iView MediaPro. It was the same problem as MacDraw/ClarisDraw — the company behind the software shifted priorities, and support lagged. Then it was acquired by Microsoft, and any future Mac support looked questionable 2. In any case, I went through a painful process to export my edits, labels, keywords, projects from MediaPro into Aperture. But now Apple has ended development of Aperture. There’s a script to migrate to Adobe’s Lightroom. It’ll bring across my keywords and captions and maybe albums or projects, but it doesn’t preserve the nondestructve edits — and how should it, when there’s no real correlation between many of the edits available in the two programs.

I have close to 50,000 pictures, all of which are organized into albums and projects, most of which have keywords, maybe a third of which have edits, and a small set of which are organized into books. So I face a monumental task to migrate, and in the process I lose the “nondestructive” nature of my edits. I’ll have to export an edited version and an original if I think I’ll ever want to re-edit an image. Furthermore, my organizational approach will need to be revisited, and some of the work I’ve put into organizing will vanish. So I procrastinate. Aperture’s still working (for the time being). I’ll wait until I’m forced to do something.

This could turn into a rant supporting RMS’s philosophy of using pure Free / Open Source software. But that’s not really the solution either. I could just stop updating my Mac’s software, and I’d be able to continue to run the application as-is. I’d probably want to disconnect it from the Internet, because a lot of software fixes are security-related. It would be inconvenient, but it’d work. Until I had a hardware failure of some kind. These issues are not exclusive to non-Free software. Free software changes and evolves too. I have a backup server dependent on Fedora Core 6 for one of the drivers. It works, but if I want to do any security patches, I’m on my own. With Free software, I’m guaranteed to be able to maintain a working system, but I still have to be willing to do all the work. There’s no panacea.

And on the pedestal these words appear:
`My name is Ozymandias, King of Kings:
Look on my works, ye mighty, and despair!’
Nothing beside remains.
– Shelley

1 I’m happy to report that today there seems to be new life in Intaglio. There are posts in their support forum, and new versions have been released.
2 Now, it looks like MediaPro’s been spun off from Microsoft again.

I was thinking about textures that are traditionally called Islamic or Moorish tilings.

One simple pattern is built by placing circles on a staggered grid, placing points around their circumferences, and then connecting points to neighboring circles in a pre-defined pattern. Here’s one example: 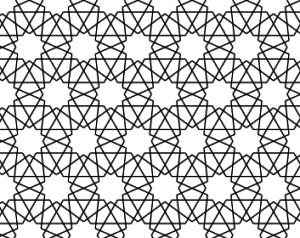 I was thinking – hey, what if I vary the radius of those circles from row to row?

Three hours of clumsy Javascripting later, I found the answer: 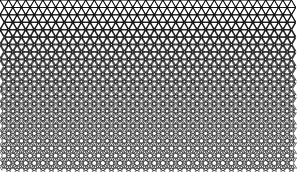 Unfortunately, it often takes hours of coding to learn that an idea’s not much good.

You can play with some of the variables yourself, or (horrors) look at the source code to see how it works. 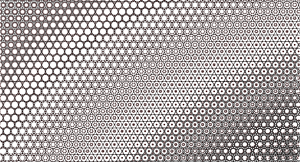 Localized images in Silverstripe with Fluent

Say you’re building a web site using Silverstripe. And say you need to localize it, and you opted to use the fluent add-on. You have a nice normal page set up, along with a slick user-selected side image. But now, just to finish this hypothetical, say you not only need text on the page to be localized, but you need the image to be localizable too (e.g., a different image depending on someone’s country or language).

Here’s what I ended up doing, and what seems to work for Silverstripe 3.1.

The page template has a simple image inclusion:

In my _config/config.php, I then added