The Quagg Wedding Chapel has had a cheap wireless doorbell system, and over time the plastic case for the button itself got corroded and ugly. 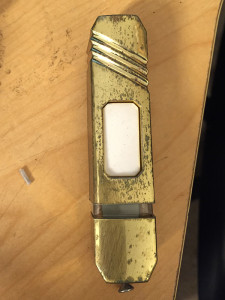 So, I disassembled the plastic button to get at the actual circuit board. Then I selected some nice wood stock and measuring devices, and started designing. 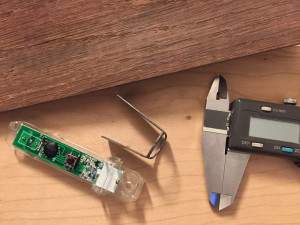 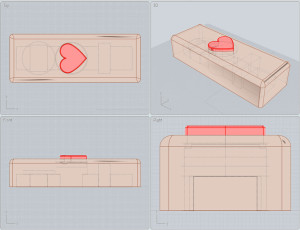 As mentioned before, my primary fabrication/making tool here is my Nomad 883 CNC device. I create my designs using Moment of Inspiration (MoI), convert them to GCode using MeshCAM, and carve them from wood, plastic, or metal with the Nomad.

First, I cut the heart-shaped button piece. This was cut from a piece of recovered Red Oak (the plank had spent some years being a wine barrel). As you can see, to prevent the cut-out piece from breaking free and rattling around before the surface was completely carved, I left some connector supports. They were cut away later. 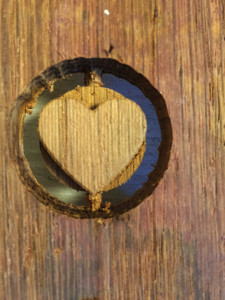 Next is the main body of the piece, cut from the lighter wood (I think it may be ash). This is a two-sided cut: the basic shape of the button holder is the one side, and the hollowed out interior with areas for the button and circuit board is the other. There are elaborate means that can be used to make a very precise two-sided cut (Carbide 3D sells their recommended “flip-jig”, which is accurate to around 1/100th of an inch, but I don’t have one). For this project, however, the alignment of the two sides only needed to be within a millimeter or two, so I did it mostly by eyeball. 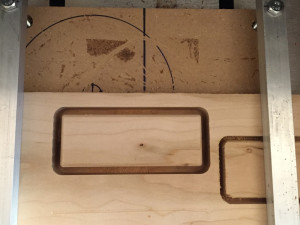 You can see there were two attempts here. The first time, I used an 0.0625″ ball cutter. The thin cut around the edge got clogged with chips, and skipped. The second attempt, I used an 0.125″ ball cutter and vacuumed a few times during the process.
Next, I flipped the piece, and did the hollowing cut. This used an 0.125″ end mill. I’m not positive I know what this lighter wood is — I set the carving parameters for as a soft wood, but I think perhaps I should have chosen hardwood. The feed-rate of the cut (the speed that the cutting bit moves) was a little too aggressive. Part of the way through the finishing phase, the cutter bound briefly and the servos skipped, resulting in an aborted cut. The carving was mostly complete and still usable, however. The damaged areas are on the inside of the hollowed pocket, so they aren’t visible when it’s all assembled. I figured it was good enough, and didn’t bother to redo the whole process. 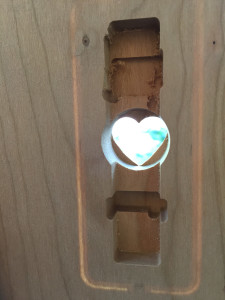 I sanded everything down a bit, and tested to see that the button portion had clearance. Yup! It works! 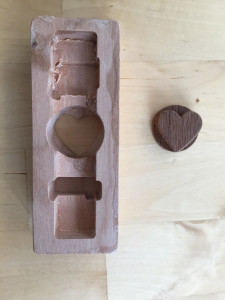 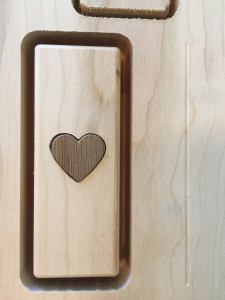 Now I separated the main object from the larger piece using an X-Acto knife. I smoothed the edges, and treated the pieces with polyurethane sealant. I slotted in the circuit board, and it all fit together nicely.

Not shown are the screws and the mounting hardware that loops around the circuit board in the slots by the battery. I added that hardware, and, with a silent mental fanfare, I put it up! 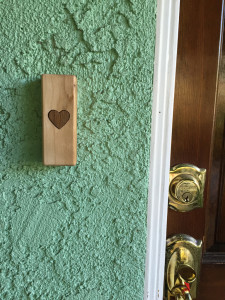 My final conclusion is that it’s kind of ugly, but in a much more homey/craftsy way than the corroded plastic it replaced. And hey! It works!