So, the squirrel-proof birdfeeder comprises two hemispheres, hung via a string, with the sphere being held open by a spring. The idea is that when the Evil Mr. Squirrel decides to plunder the birdseed, he’ll have to put his weight on the upper hemisphere, thereby compressing the spring, thereby closing the gap and leaving him bereft of plunder opportunity. Birds, on the other hand, can alight directly on the rim of the lower hemisphere or enter inside. Here’s a picture of proper operation:

Squirrel-resistant birdfeeder in operation, as per design

Alas, Evil Mr. Squirrel has two attacks on this system. The first is to climb onto the string, and swing violently back and forth until the seed falls from the feeder, then he harvests from below.

The second attack is to climb down the string, and jump repeatedly until he manages to catch the edge of the lower hemisphere, and somehow vault himself up. His Evil agility scarcely believable… 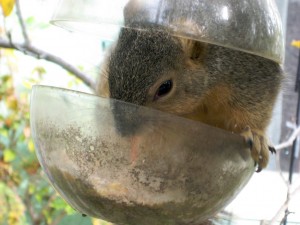 Caught in the act!

So in the middle of taking a set of pictures, I noticed that my D90 was not actually saving the pictures I took. The mirror would flip up, the shutter would click, but the display would show the same older picture again.

I tried the usual suspects. Turning the camera off and on. Changing the directory on the card where files were supposed to save. Swapping out memory cards. Reformatting memory cards. Doing the two-button reset. Doing the menu reset. Pulling out and then replacing the battery.

I could shoot a picture with a blank memory card installed, and the display would say “Folder contains no images.”

I searched on the internet for this symptom, and found no other reports of it.

Et voila! Now it works. I don’t know if this is reproducible, nor if I’m just heading down a path toward permanent issues, but I figured it would be worth posting just in case anyone else has the same issue.