It’s time to reupholster the kitchen chairs. They’re just (relatively) cheap Ikea chairs, but it seems like it’d be a waste to pitch them just because the non-replaceable cushions have become stained and/or faded. I figured I’d reupholster them myself. I’d never done this before, but how hard can it be?

So I found myself in the office, using a few homemade implements to loosen hundreds of staples, and then pincers to pull ’em out. Quacky (the cat; formally addressed as Daphne) kept interrupting. She evidently found the activity irksome, insofar as it did not involve petting her.

The new fabric color is an orangey, stripey color (not unlike Quacky), and as I worked my mind wandered about pumpkins and other symbols of the season. 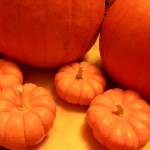 Why is it, I wondered, that October brings not only a proliferation of Halloween decorations, but also the appearance of Christmas decor? After all, there’s another significant holiday betwixt. Is the reason thematic? Well, perhaps, I concluded, but not really. Halloween is superficially about spookiness and perhaps confronting mortality, but it’s really an excuse to break out of the humdrum, to escape normal standards of behavior, to don costumes, to go mad with decorations, and for adults to drink and children to overindulge in candy. Christmas as celebrated here is ostensibly a religious holiday (and again, a chance to confront concepts of mortality), but it’s really observed more as an orgy of gift-giving/gift-receiving, a chance to wear silly reindeer hats to the office, an excuse to go mad with decorating, and a justification for adults to drink and for children to overindulge in candy.

I had finished removing the staples, and using the old fabric as a template, I traced out the shape on the replacement fabric, and cut my new portion. Then, after giving Quaky a few minutes of petting, I got back to work, stretched the new fabric over the foam and tried to make sure it all lined up correctly.

OK, so both Halloween and Christmas provide a justification to behave differently. They are both holidays about consumption, whether in the “buy a whole lotta decorations” or the candy/alcohol sense. But that forgotten holiday centers around feasting as well: Thanksgiving is a well known opportunity to overindulge. So why are stores filled with Christmas stuff instead of the chronologically more appropriate Thanksgiving stuff? After all, you can decorate for Thanksgiving too — many of us have fond memories of making cut-out paper Pilgrims in their belted hats and turkeys in elementary school. Why not turkey and corn yard decorations?

By now, I was trying to secure the new fabric, and my staple-gun kept jamming. I had to disassemble it twice to remove mis-fed staples that had gotten twisted up inside the mechanism. And when it worked, each thwack of a staple going in would startle Quacky, and she gave me a doleful yellow-eyed glower.

So is Thanksgiving less of an event because of our discomfort about what likely befell the Native American hosts of the first Thanksgiving? Elementary school pictures always had happy “indians” partying with the Pilgrims — it wasn’t until later, that we wondered if those were the same “indians” who fought against the cowboys. And it wasn’t until much later when we ventured into A People’s History that we got anything like the actual story.

Or is Thanksgiving not a such a great marketing opportunity because it’s ostensibly about appreciating what we have? It may be hard to sell gratitude as a consumable product. I personally find gratefulness to be a powerful emotion, and a positive influence on my day to day mood. I keep a list with me, entitled “important things,” where I occasionally jot down small circumstances for which I’m grateful. At one point, Elizabeth and I had a bound book where we planned to write down daily gratitudes: unfortunately, that seems to have gotten lost in the shuffle. Perhaps a rigid schedule is not the right approach, but I think the idea still has merit. Still, bound books or no, it’s going to be a lot harder to sell gratitude gear at WalMart than it will be to sell realistic brain-dripping lawn zombies or battery-powered Santa Clauses.

I finally got the fabric stapled down, and one chair finished. It was an amateurish job, but not bad for a first try. Quacky looked more than a bit skeptical, but I’m optimistic that the next three will be better. 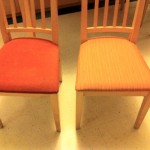 I was running into problems with conflicting autoloaders when I tried to use PHPExcel with the Yii framework. There are instructions out on the web on how to resolve this, but they are only useful if you’re not creating instances of Yii active record models while you’re using PHPExcel. That’s fine if you’re using Yii to create an Excel spreadsheet from already instantiated Yii classes, but my need is to read an Excel spreadsheet and import its data into my database.

It turns out that this is fairly straightforward as well. The trick is in realizing that PHPExcel is registering its autoloader when it’s instantiated, so you don’t need to register it yourself.

Pretend WordPress didn’t hose the formatting on that …

I’ve been publishing a bunch of old projects that I may have posted here, or simply left on my hard drive to suffer the slings and arrows of outrageous bit-rot. Most of these are projects that I created for some specific purpose or another, and have either coded to the point where I’m satisfied with them, or abandoned them.

I’m publishing this stuff in the hopes that it’ll be useful to somebody somewhere. In some cases, the code’s primary use may be as an example of how not to accomplish a task. In other cases, they’re projects that are being used in mission-critical operations, and so are reasonably robust.

I’ll be maintaining them on GitHub, if you want to get creative with the definition of “maintaining.”