When I last posted, I was playing with plastic and metal prints from Shapeways.com. So here’s an experience printing in a different material — gold-plated brass. As with last time, I used MoI modeler. I wanted to make a butterfly pendant for my wife for our anniversary. My initial try used an actual photograph of a monarch butterfly that I had taken in our garden. I traced the outlines, and created extruded forms for the wings. I then created the shape of the body, and a ring for the necklace chain to pass through.

When I uploaded it to Shapeways, however, I immediately ran into printability problems. I had misunderstood the limitations for different materials. When they say that the minimum dimension for an unsupported wire is 1mm in a given material, I had for some reason interpreted that as having a minimum cross-section of 1mm2. So, for example, I thought I could get away with a 0.5mm width if the thickness was 2mm. This interpretation was not based on their actual requirements. So it was back to the drawing board.

It turns out that using the actual dimensions was not going to be a successful approach. In the end, I bit the bullet, and did a complete redesign inspired by — but not matching — an actual butterfly. Since I was now dispensing with reality, I chose to make it more dramatic by having the wings all spread apart rather than overlapping as monarch actually hold their wings. The design that would be printable looks like this: 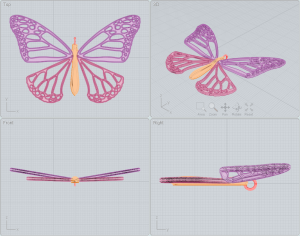 I ordered the print three weeks before our anniversary, since the estimated turn-around was 10 days. In the end, it shipped in five days before our anniversary, but it didn’t actually arrive until the day after. Bummer. Then, while it was en route, Shapeways sent out an email extolling their new approach to precious-metal-plated items. Same price, better results. Well, thanks, guys. I mean, I know there has to be a transition between approaches at some point, but I wish it wasn’t between the time I’d placed an order and received my print.

Still, as even this shaky iPhone picture shows, the final result was OK. 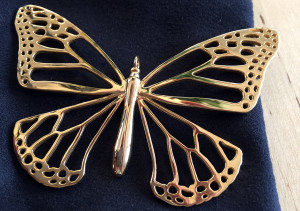 Coming up soon: some posts on a completely different path I’ve taken to 3D production. Here’s a hint.