After seeing an article where they showed brownies baked in egg shells (via BoingBoing), I thought it would be a good thing to try for a family gathering. Thus began a haphazard adventure in baking… 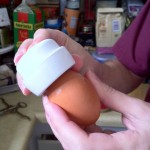 Start by piercing the eggshell with a fancy tool 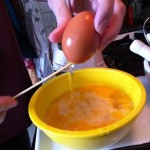 Empty the egg, using a skewer to assist 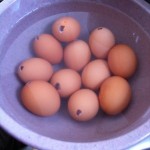 Soak the shells in salt water for half an hour 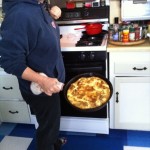 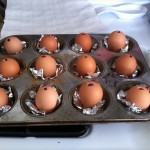 A muffin tin provides the support for baking 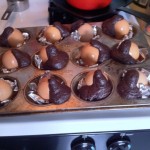 The recipe may have said “fill 2/3rds” with the brownie mix but what they meant was “fill 1/3.” 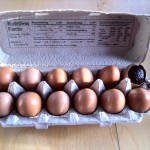 The final dozen, back in the carton.

As much as I like some of the new crop of young adult fiction, I can’t help but wonder if this phenomenon isn’t just rooted in publishers being squeamish and authors being lazy. The category allows — no, encourages — writers to be less nuanced, paint with broader strokes, and, of course, avoid sexuality altogether.

Then again, the YA Fiction phenomenon may simply be symptomatic of “non-young adults” non-reading.

The Magic of New Things

We humans appear to be programmed for scarcity. We lust for high energy foods — sugars, fats, refined carbohydrates — even when we’re not hungry. Just thinking about donuts may be sufficient to trigger a rewarding brain chemistry reaction1. Similarly, we tend to gather possessions — often far more than we need. We don’t dispose of old, unused possessions because we’re sure we may need them some day. And we’ll often acquire things we don’t need because we anticipate they will be more difficult to obtain in the future. We don’t need them now, but there is the possibility that we will need them at some later time. As advertisers have learned, a quick way to make someone want something is to give the impression that the opportunity to have it is limited: buy now! So we do.

There is an obvious (and possibly even correct) evolution-based argument for the behaviors of scarcity. If a species spends 200,000 years struggling to survive in a minimal environment, those who hoard or are gluttonous may well have a survival advantage over those who don’t or aren’t. A few calories here or there could be the difference between life or death. An animal pelt could make the difference between freezing to death and surviving.

It turns out that there may be corollary programming that motivates us to seek out new and novel things. When we encounter new stimuli, we receive a short-duration boost of some of the same “reward” brain chemicals as we do from food or sex2. Again, a series of questionable evolutionary explanations can explain this: those who explore are more likely to discover untapped resources and thereby have a selective advantage, or perhaps those who try new things may discover new uses for already identified resources3.

So now we fast forward to our time of relative abundance. Modern society has exploited this set of unpatched vulnerabilities in our brain chemistry, and combined our programming for accumulation and our programming for novelty to create a consumer culture4. The fashion industry tells us we need new, novel shoes, while the computer industry tells us we need to upgrade to the latest versions of everything. We need to add new music to our collections every week, and try the latest McProcessedMeat sandwich, see new movies, learn the latest dance, and so on. Every Christmas, there’s the hot new toy that everyone needs to get, whether it was a Hula hoop, a Magic 8 Ball, a pet rock, Beanie Babies, Tickle-me Elmos, Cabbage Patch Kids, or a Furby.

Even outside of obsessive consumer culture, we’re fascinated by new things, especially if they fit into some familiar framework. There’s something tremendously exciting about receiving an unexpected letter or a package in the mail, often amplified if we can identify the sender. It can trigger the anticipation response, the accumulation response, and the novelty response all at once. What’s more, even virtual items evoke a similar emotional reaction: an email from a friend, or an incoming SMS or incoming instant message.

The Internet is rife with sources for these novelty and accumulation dopamine-hits. We subscribe addictively to news feeds. Countless companies like Facebook and Twitter capitalize on our desire for a stream of new-but-familiar snippets of information from and about our friends. Online games allow us to accumulate virtual goods (points, badges, titles, Linden Dollars, ISK) while we explore new environments. Our smart phones let us download new apps, and notify us daily of updates to our existing collection.

All of this finally brings me to my actual point, which involves the creative process. Why do people get such pleasure from creating new things? Perhaps the sense of satisfaction from making things is a combination of the reward-impulses discussed above. After all, when you make something, you end up with some increment over what you had before. This keys into the stockpiling instinct. What’s more, as you make things, you are provided with stream of exciting new things (especially as your skill level increases). Part of the act of creation is discovery5, which speaks directly to our desire for novelty.

Of course there are many additional reasons to create. There’s the need to express emotion. There’s the cultural status as an artist (or the absurd title “Maker”6). There is the struggle against boredom, or distraction from problems. There is simple necessity, in the case of inventions, followed by indolence (if necessity is the mother of invention, surely laziness is the father). Still, with the possible exception of inventions, I would argue that the desire to create in response to those reasons is rooted in the brain chemistry surrounding the magic of new things.

1 Well, in any case, anticipation of food (or other pleasures) are associated with release of “happy” brain chemicals like serotonin and dopamines.

2 I’m oversimplifying, as usual, but there is evidence that suggests that novel situations (and even the anticipation of novelty) both give us a lift.

3 It’s worth noting that these arguments have simple counter-arguments. Those who explore new places may be more likely to discover new resources, but they’re also more likely to be eaten by a hitherto unknown monster or contract a disease for which no prior immunity exists. The fun thing about evolution-based explanations is that they’re often simple, convincing, and wrong.

4 I’m sure someone will point out the US-centricity of these ideas, and I don’t deny it. While anecdotally, I’ve observed similar behaviors in people in places where I’ve traveled (including places which have significantly different cultures), I freely admit that I see things through the lens of my US culture. It’s also worth noting that in an environment of relative abundance, the tendencies encouraged by consumer culture can kill us, whether via obesity or being buried alive under our hoarded collections of National Geographic magazine and Royal Wedding commemorative plates.

5 As artist and teacher Penny Longpre once told me, “the difference between an artist and an amateur is that an artist knows which mistakes to keep.” Artists often refer to the paint or the clay having some kind of volition — a mind of its own. I think this is really the same thing. Whether it’s unintentional details or a result of the characteristics of the material, unexpected elements provide ideas during the creation process, which can then lead the work into new directions.

6 I’m overly sensitive to this self-congratulatory bit of culture. I’m not sure why every generation seems to think it has single-handedly invented music, sex, and everything else. The octogenarian down the street was no less creative in crafting his model railroad just because he didn’t call himself a “Maker,” and his wife was no less innovative when it came to improvising implements around the house even though she didn’t use the “DIY” acronym. People are resourceful and adaptive, and don’t need self-aggrandizing labels to legitimize their accomplishments.

Coder #1: Man, revision control sucks.
Coder #2: What? Are you insane?
Coder #1: Insane? I don’t think so.
Coder #2: How can you say revision control sucks, then?
Coder #1: Well, I’m stuck using SVN.
Coder #2: Subversion isn’t so bad. Especially with the new merge tracking stuff from version 1.5. It’s pretty easy to use.
Coder #1: Yeah, well, I stand by my assertion. It sucks.
Coder #2: Can you be more specific?
Coder #1: Have you tried using SVN in a mixed environment? Say Windows, Linux, and Mac OS?
Coder #2: It’s not going to be line-ending issues. Oh, I see. You’re talking about case-sensitive versus case-insensitive filesystems.
Coder #1: I wish it was that easy. That’s crappy, but you can work around it.
Coder #2: Then?
Coder #1: A riddle for you. When is UTF-8 not UTF-8?
Coder #2: Huh?
Coder #1: When it’s in a filename.
Coder #2: [clicks, reads]
Coder #1: But I guess if you don’t have any Macs or ZFS around, you’re fine.
Coder #2: Holy Linus on a unicycle! Well, I guess it’s back to dated tar files…
Coder #3: Use GIT, you IDIOT!