It’s Springtime in the Quagg Garden, and several hummingbirds have declared it their own exclusive territory. When I take my lunch, I am greeted by spectacular aerial displays: both mating rituals and territorial defense. Less dramatic and yet equally (sonically) expressive, the mocking birds seem to be nesting nearby. Plenty of finches and bushtits and crows come by too.

Starting a bit early around Mar Vista, even though the nights are cold.

Moving away from Aperture

I’ve finally moved away from Aperture.

Back in the day, when I was still largely shooting film and occasionally scanning prints or negatives, I organzied things by directories. I’d have descriptive names like “hike_at_paseo_miramar”. Over time, this became unweildy, and I had the startlingly brilliant and utterly original idea of organizing by date as well, so I had a directory the looked like:


You can see the problem. I found I could keep this going by using Adobe Bridge, but I needed a better system. For a while, I organized my pictures on a web server with a cobbled-together collection of perl programs. That was manageable for about two months. Eventually, I tracked down some novel software to organize photos: iView Media Pro. It used the now-familiar idiom of folders (which represented physically where they were on the disk), virtual albums for grouping, and keywords.

iView was great until it wasn’t. The company didn’t have the resources to support it to the degree it needed, and occasional bugs (like the one that wiped out keywords for a few thousand pictures) were frustrating. When the product was sold and the team migrated to Microsoft, I figured it was time to move on. I went with Apple’s $300 “Professional” product: Aperture.

I had to write some code to export my keywords and organization from iView into Aperture, but that left me with a system that worked. It served me well for ten years. For the last two of those years, a cloud hung over me. Apple end-of-lifed the product, and, while it continues to run, did not get any new features or bug-fixes. With each new version of Mac OS, there was the risk that I’d no longer be able to run it.

I did a trial of Capture One, and was impressed with the RAW processing and the workflow. Where it failed for me, though, was in the cataloging. At this point, I had about 55,000 photos in my catalog. Because I like to have them all “with me” at all times, I kept my library on my notebook. I realize this is a strange requirement for most people, but I like the ability to bring up a collection of pictures from a given trip or a given event when I get together with someone else who participated.

Capture One had a hard time keeping up with that many photos. I considered breaking the catalog into separate, smaller collections, but was still resistant to any little impediment to finding the picture I want at a given moment. Ironically, Phase One, the company who creates/sells Capture One has acquired iView Media Pro from Microsoft somewhere along the line. I contemplated moving back to it, but realized I’d need to get that, plus a RAW-processing package, etc, and decided against it.

The 10,000 ton elephant in the room, of course, is Adobe Lightroom. It dominates the photo processing/organizing space. I didn’t want to move to it because of the software subscription model. I don’t want to be beholden to Adobe for all eternity.

Still, after trials of several products, I have been forced to surrender. Lightroom is the only product I could find that worked as well as Aperture.

Lightroom will import Aperture libraries, but the non-destructive editing from Aperture does not come across. Some adjustments might, a lot of metadata will, but those painstaking edits do not. I invested in ApertureExporter, which helps the export process by building a copy of the catalog, and creating extra copies of edited images where it “bakes in” the changes. So you’re left with the original (in case you wish to re-edit), and a JPG or TIFF version with all your changes. I left to run all night, and the result was a nice clean export.

Importing into Lightroom was not difficult. It was interesting to see all the cores of the CPU go to nearly 100% utilization while LR generated previews. I opted for large previews (typical screen resolution). This allows me to have the versions to show off to people (as I mentioned above) while keeping the originals on an external drive that may or may not be attached at any given moment. LR has something called “smart” previews that you can even edit while offline. I didn’t think it made sense for me, but I may revisit this decision later.

I was graciously given a nice tutorial on the basics of using Lightroom by Tomas Fjetland, which helped get me up to speed.

Some observations. Some things in Lightroom are much easier than in Aperture. Lens correction is a single click, instead of requiring a separate plugin. Some things in Lightroom are harder. Having separate panels that you have to switch through for “Library” functions (cataloging and managing keywords) and “Developing” (adjustments and edits) seems unnecessary, especially as the switch doesn’t really result in more efficient use of screen real-estate. Tagging keywords requires a lot more clicking. An auto-completed keyword requires one hit of the return key to accept the auto-completion, and a second hit to apply it to the image.

I’m still pretty slow at the editing tools, and the paradigms are not identical. All that old muscle memory in my fingers is slow to retrain. Overall, I’m pleased with some of the results I’m getting, but it will still be a while before I’m as quick or adept at Lightroom. No doubt I’ll revisit this posting at some later date.

The Goodyear Blimp was passing overhead. It’s noisy! Since it was pretty low, I tried to take an iPhone picture. In the shot, I got a serendipitous cameo by one of the local Anna’s Hummingbirds. 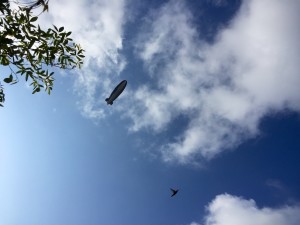 Equinox in the Garden.

Stereo separation’s a little too wide on this experiment. I think it might be time to fabricate a precise positioning rig for my tripod… another project on the list.