Nearly two years ago, I wrote a quick note on how to switch iframes in PHPUnit/Selenium to populate an xhEditor text area.

Because we’re seeing a lot of formatted text cut/pasted from Microsoft Word, we needed to replace xhEditor with a WYSIWYG that does a better job of stripping out all of the horrible cruft that the Word formatting causes. TinyMCE seems to do a decent job (given the impossible nature of the requirements), but my test code no longer works.

Here’s how I got it working again. I added a function to my base WebTestCase:

Then, in any arbitrary functional test, I can type stuff into my TinyMCE field:

I upgraded my trusty iPhone 5 to an iPhone 6 back in December. I’ve used the old iPhone as a camera for doing some timelapse work, as a geocaching GPS and Ladybug recorder when taking my nephew on a Lost Ladybug expedition, and as a music player to drive a bluetooth speaker in my office. Now that my Mom is tentatively considering entering the world of smart phones, I thought I’d get it re-provisioned so she could try it and see if she likes it before springing for a bigger / newer phone.

Now, one of the great things about the iPhone 5 (as opposed to earlier generations) is that it has multiple radios in it, and supports multiple carriers. This particular phone is unlocked, and was used successfully in India with a Telestial India Airtel SIM card, and in several areas in the US with various other third-party GSM SIM cards on AT&T’s network.

When Mom’s hiking, her AT&T coverage drops out with her current phone. My Sprint coverage in the mountains is spotty at best, so a process of elimination led me to think it would be a good idea to switch the phone over to Verizon. The internet assured me that this was possible, beginning with the iPhone 5. Thus begins Act I. 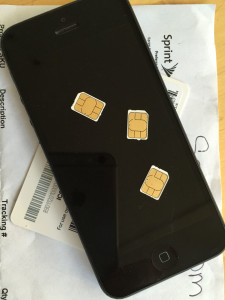 Reactivating an iPhone, a Tragicomedy in 7 Acts
In which the author wastes over six hours in various retail establishments to get an unlocked phone active with a month-to-month plan.

Act I. The Verizon Store. The first tech looked at me dubiously. “You can’t use a Sprint phone on Verizon,” she said. “It’s unlocked,” I assured her. After recounting the litany of networks above, her suspicion increased. “You sure you weren’t just roaming on other networks?” she asked. Once I had sufficiently convinced her that I had swapped SIMs, she was willing to give it a try. She warned me that she hadn’t seem much success in moving iPhones from Sprint, even when unlocked, due to a “Verizon block.” Being prudent, she tried to use one of the store’s demo SIMs. After half an hour of resetting carrier settings and various other things, the best we could get was an “Invalid SIM” error. “See?” she asked me.

Act II. Another Verizon Store. I had tested my phone’s IMEI on Verizon’s compatibility check, and it said I was good. So I went to another Verizon store, armed with this information, and tried again. This time, I was signed up for an account, assured that it would be simple, given a SIM, and had my credit card charged all between sessions where the technician froze, spellbound by the Mexico/Panama football game on the big TV. But it didn’t work. We got “Invalid SIM” errors. It turns out there is some mysterious Verizon block, after all, even if Sprint considers the phone unlocked. “No problem,” he told me. “We can get you into a free iPhone on a month-to-month plan.” I was skeptical and amazed, but said OK. When it came time to sign on the dotted line, the box I was handed was a Galaxy S4. I made it clear I needed an iPhone. “OK, I can’t get that for free, but I can get you that for $100.” Still skeptical, I again said I’d try it. This time, I was presented an iPhone 5c, a $100 activation fee, $150 in various other up-front fees, and a 2-year contract. At this point, I got my original charge refunded, and left.

Act III. Screw it, thought I. I’ll just keep it on Sprint. If Mom likes it, we can switch networks later when she upgrades. I went to the Sprint store. “No problem,” they said. “We’ll just add it to your existing account as an extra line; it’ll be cheap and easy.” But then they noticed there was no SIM. Somewhere in the long history, the original Sprint SIM had gone missing. If I had known the pain this would engender, I would have given up then and there, and just bought a new goddamn phone. But it seemed no problem. They had a SIM card from an iPhone 6 that someone had returned, we’d just use that. The tech and I had long conversations about travel, Boston, work, school, and such things while she went through the endless steps to provision and reprovision the phone. After a few popups about SIM failure, it seemed to work. I could call to and from the phone! Victory!

Act IV. The phone, sitting on the charger, showed a popup saying “SIM has been locked” and the carrier header said “SIM Fail.” I power cycled the phone, and hey presto! It was back on Sprint. I tried, just for kicks, to bring up the web browser. Immediately, I got a “Data access denied” error, followed rapidly by the “SIM has been locked” and “SIM Fail” notices. Power cycling brought it back. And then the fail cycle happened again.

Act V. Back at the Sprint store. “Sorry, the iPhone 6 SIM must not be compatible. Better to go the Apple store and get an iPhone 5 SIM.”

Act VI. At the Apple store. “Sorry, we’re out of nano SIMs. We don’t have any for the iPhone 5.” but I looked over the shoulder of the tech, and saw numerous SIMs listed. “What about those?” I asked, pointing. The tech went off to talk to another tech. She soon returned. “OK, we have a floater phone, and we’ll use that SIM.” So eventually someone brought over a card with the SIM, and the tech spent a long and frustrating session on the phone with Sprint trying to get the SIM activated. Eventually, this was successful. Strangely, the phone would connect to the network, get three bars, then drop to a single bar and lose 3G and display the “1x extended” data plan. “We have awful Sprint coverage here,” said the tech. I looked at my other phone, at it had three bars. “It may also be that they haven’t activated it yet,” she said. In the settings, we confirmed that it displayed the correct phone number. “I’ll try calling it,” I said. Nothing happened. We power cycled the phone. The phone number in the settings now read “0007423.” The tech said “Well, either your phone is broken, or you need to wait for the activation to go through.” When I asked how it could be broken, she shrugged. “You said yourself that you didn’t use it as a phone for a few months,” was her best answer.

Act VII. At the Sprint Store. I recounted Act VI to the tech. He looked up the SIM in his database, and scowled. “No way, dude, that SIM’s not compatible.” I handed him the iPhone 6 SIM the other Sprint store had given me. The process repeated. “No way,” he said. “Not compatible.” Where could I get a compatible SIM? His advice was to go to a Sprint repair center, where they have more supplies, since the retail stores don’t carry extras. As I was about to leave, he said “wait! Someone returned an iPhone 5 not too long ago. Let me see if it’s still back there, and if it had a Sprint SIM in it.” Wonder of wonders, it was and it did! After a mere ten minutes of typing into the mysterious terminal, it came up. I could call it from another phone, and it could call another phone. It connected to data services with LTE!

Error: Timeout – Async callback was not invoked within timeout specified by jasmine.DEFAULT_TIMEOUT_INTERVAL.

No, this site’s not crashing. That’s the error message I was getting when running a Karma test of some Angular / JavaScript code.

The usual suspects (when Googling) is having an argument to your it function. But my it function had no argument.

As usual, this is likely obvious to everyone but me. I’m posting this in the off chance someone else has the same problem and is as dumb as I am 🙂

Nervously, Renny “The Cart” Cartesius stood in an ill-fitting uniform before the throng of federal agents, police, and bystanders. To his chagrin, he noticed that “Blazin'” Pascal was in the crowd, and was staring intently with a look of puzzled half-recognition — and then Pascal’s face lit up as he saw through the imperfect disguise.

Knowing that his cover was about to be blown, The Cart took a calculated risk. Hissing them quietly under his breath, he spoke the immortal words: “incognito ergo schtumm!”