I needed to check that the index process that populates the Solr index succeeded and didn’t die during the night, leaving an empty index.

To make things more complicated, the versions of Solr and nagios in use are probably not the latest.

The check_solr -o numdocs command doesn’t work with our Solr configuration. But the internet tells me that the Solr query http://localhost:8983/solr/select/?debug=qâ€Œuery&q=*:* includes the size of the result set. Testing it, I found this to be true:

I want to use nagios to check that that numFound is never zero (or too small). I thought I’d just be able to use a nagios regex:

It didn’t work. To make a long story short, there’s regex and then there’s regex. The kind that works for nagios is:

This guarantees at least a hundred docs are in the index.

It shouldn’t surprise us that JavaScript does too.


Now, purists will point out that that’s an “equals” operator not an “identity” operator, but I mean seriously? We’re just going to pretend that

I think I’ll just go and rewrite all my client side code in C now.

Seems sane, yes? Reasonable. Kind of what you expect.

But then, consider this:

Yeah. Let that sink in for a moment.

Some versions of PHP (before 5.4.mumble) will preÃ«mptively convert strings to numbers before comparing them (if they contain only digits). But if the number is large enough, you may lose the precision to compare them correctly.

For what it’s worth, strcmp will do the right thing regardless of PHP version. But seriously. I mean. Why do I use this turdburger of a language?

So, for our tenth anniversary, I thought I’d make something slightly more … dynamic … than your standard Hallmark card. I thought a simple JavaScript game might be fun.

Since everyone knows that a happy marriage is made of unicorns and rainbows, I figured I’d work with that. My first though was a single-level platform game. I looked at a number of JavaScript game frameworks, and they were all either much too simplistic or much to complicated for what I wanted to do. I spent too much time in the process of starting a game with a new framework, getting frustrated, and then abandoning it. Oh no! I was running out of time!

I decided to bail on frameworks, and just write a quick, simple, pure JavaScript game. I would use animated GIFs as sprites, and do the rest in Canvas. Seems easy.

I raided the usual sources for my assets. I needed a unicorn, so I gave a horn to the Wikipedia running horse animated GIF (which itself is derived from Muybridge’s photos) and knocked out the background. It looked pretty good on a white background!

I then made some animating rainbow hearts, and I was ready.

After the initial stab at coding, unicorns would run back and forth, and rainbows appeared where the user clicked. If the unicorn was within the rainbow ring, I’d register the hit. I was well on my way.

Next, I added the score animations. I was impressed by how smoothly the animation all worked. On a reasonably recent machine, browsers keep up very nicely. Then I went and tested on iOS. Uh-oh. I’d not been very careful about browser size. I ended up recoding the CSS and dimension code to be more or less responsive. OK, seemed good. I added an explosion of hearts effect for when you hit the unicorn. Next, I found a nice source for sounds.

One of the problems I faced was that I was trying to develop the project while sitting on the sofa in the evenings. I’d come home from a long day of coding, and, well, start coding. But then Elizabeth would come home, and I’d have to keep switching windows to avoid creating suspicion. This is where the ability to disable the audio came in. Over the course of a week, I was able to polish it up enough for deployment. It’s far from perfect, but it was well received. 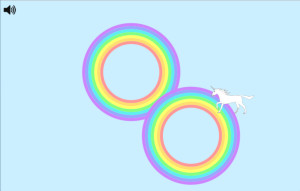 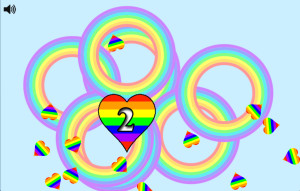 Play it yourself, or use the code to create your own game.

Onion Texture in Javascript and Canvas

When I’m focused on other things and doodling, one of the textures that regularly emerges is a fill pattern of concentric irregular circles. 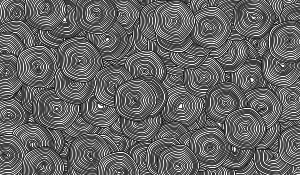 Now, doodling is a way of letting my mind idle. Why I’d want to automate that, I couldn’t say. But for some reason, I did.